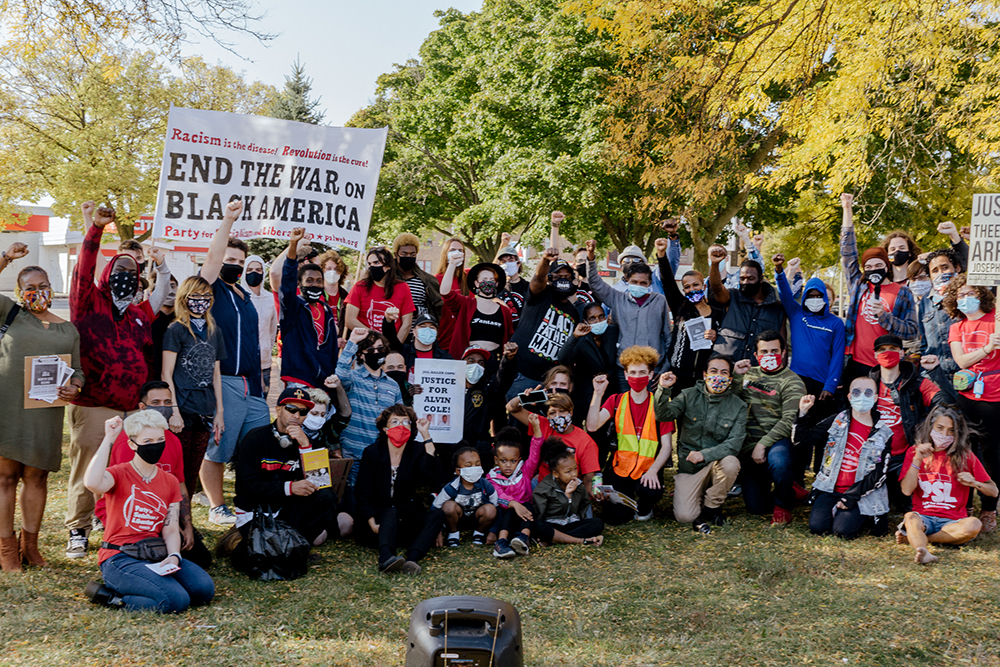 On Oct. 10, Party for Socialism and Liberation Presidential candidate Gloria La Riva joined with Milwaukee grassroots organizers and community members to speak about what her candidacy means in opposition to the two dominant parties. Organizations such as Northside Rising, Los Brown Berets and Black Women’s Emancipation joined the Milwaukee PSL branch to rally for revolution, an end to the war on Black America and to take a stand against the capitalist state.

The La Riva/Freeman ticket is on the ballot in 15 states and is an official write-in for Wisconsin. The options presented to Wisconsinites on the ballot are the Republican incumbent and the Democratic nominee, as well as several far-right wing parties, all of whom inherently represent capitalist and racist structures. The capitalist two-party system does not provide representation to working-class and oppressed people. The need for revolution rang clear in PSL speaker Juan Salgado’s statement: “Capitalism needs people to exploit, and that comes from the form of exploiting the labor of millions of people around the globe.”

The La Riva/Freeman ticket gives the people an opportunity to protest against the two-party system and US Imperialism broadly. “So many young people in this country are saying no more. People in the Black community, Latino, Native, and white working class communities are saying no more. We are not playing the game of voting for Democrats or Republicans,” said La Riva.  La Riva also spoke to the fact that, “the food you’ll eat tonight, the food you ate this morning comes from the labor of the immigrants, comes from the labor of the undocumented.” She noted that the working people who harvest food for our country to eat are targeted for cheap labor due to their lack of rights. Because they are not citizens, they are not able to exercise their right to vote or organize with labor unions.

The capitalist system continually feeds the rich, allowing them to accumulate massive wealth, while the working class, which produces all value in society, gets poorer. Working-class wages are not keeping up with inflation. La Riva noted that the equivalent wage of a meat packer in 1982 was $24 per hour. Today these workers average $14 per hour, while their productivity has tripled in the last 38 years. This increase in revenue does not go to the working people but becomes the profits of large corporations. David Sinclair, from Northside Rising, said: “We live in a time where the top one percent of the world uses racism and classism to keep a nation divided, only to keep their pockets lined.”

Voting is not the overall solution for change. In order to achieve true liberation, we have to dismantle the whole capitalist system and replace it with socialism through revolution. Milwaukee is one of the most segregated cities in the nation. Speaker Dana Kelly, from Northside Rising, noted Milwaukee’s segregation is due to capitalism and putting profits before people. She advocated for the people to rise up and do something, strategize, organize and mobilize. Sinclair also called for revolutionary action in these uncertain times. He spoke on the importance of having a made-up mind, “to put our feet to the pavement and our hands to work, and our minds to be educated. Revolutionary action not only starts with ourselves, but getting involved with an organization. An organization with a plan, with morals and values.” La Riva has a long history of anti-racist organizing, as well as a strong belief in workers’ rights. When
confronted with the rhetoric of racism and police support, PSL is standing strong for equality and empowerment of the people!