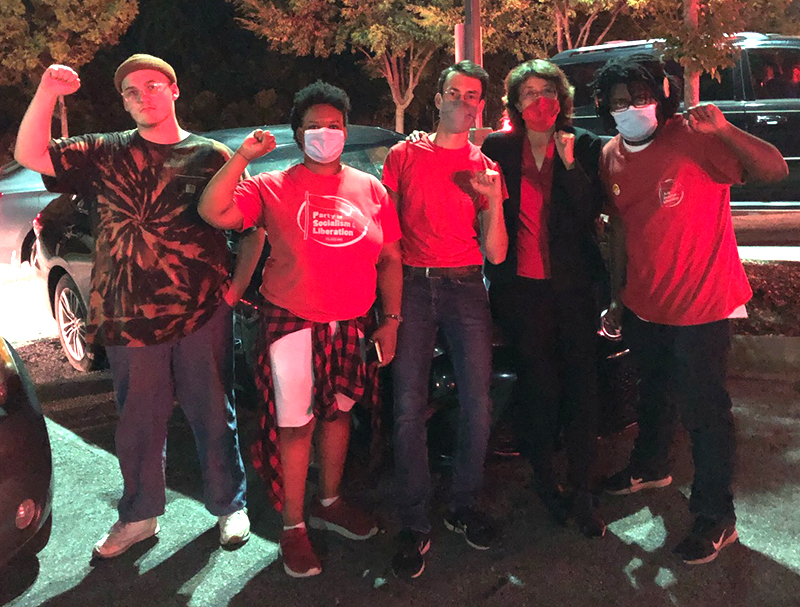 “Whoever wins the presidency, we need to be in the streets that night. We know the struggle has to continue,” Gloria La Riva, 2020 presidential candidate of the Party for Socialism and Liberation, emphasized on Tuesday at a campaign rally in Columbia, South Carolina.

Community members gathered for the event and heard the socialist candidate and organizers with the Party for Socialism and Liberation (PSL) speak on a number of struggles facing the community.

One organizer spoke on the housing crisis in South Carolina - a crisis greatly exacerbated by the COVID-19 pandemic. Another spoke out against racist police terror, condemning the April 18 murder of a 17-year-old child by a Columbia police officer. Supporters held a banner printed with the people’s demand for the racist capitalist state to “Stop the war on Black America!”

This bold-lettered proclamation, accompanied by the statement on the need for constant struggle no matter the outcome of the November 3rd elections, encapsulates what the La Riva/Freeman campaign is about and why it is different from others. The objective of the campaign is not to “win” the White House, but to engage with the people politically, to organize the working class, exploited, and oppressed in the international struggle against capitalism, to fight for a new system - socialism.

La Riva concluded the event with an invitation to join the PSL in the struggle - a call that was heeded with enthusiasm as several in attendance proceeded to fill out an application to become a member of the Party.

In the hours leading up to the event, Comrade La Riva and other Party members conducted outreach in the neighborhood near the park with fliers and campaign palm cards, talking with community members and explaining the socialist platform of the PSL.

The residents of the community had horror stories to tell about their struggles under capitalism. Many residents face astronomically high utility bills and landlords which they were forced to work for as modern day serfs, with the threat of eviction should they try to better their conditions. Others are confronted with conditions of under-housing and homelessness, not knowing where their next meal is coming from or where they’ll lay their head down at night. People are facing all of this in the midst of a global pandemic which has claimed millions of lives.

In the face of these struggles, people were receptive of the 10-point program of the PSL, which calls for making the essentials of life - housing, food, water, healthcare, and education - into constitutional rights. Community members know that this is the solution that is needed. Comrades emphasized that this solution can not be realized by simply voting for the PSL, but that we must organize to overthrow the oppressive capitalist system. This is what we mean by revolution, which can only come from the organized people themselves, standing in unity and daring to struggle together.

La Riva’s campaign stop in South Carolina was more successful and sincere than any conducted by either of the two major capitalist politicians, who have unlimited funds at their disposal. There is no illusion by anyone supporting or sympathetic to the campaign that the PSL will win the White House through bourgeois elections. This is not the merit by which the campaign’s success can be judged because it is not the reason the campaign began. In South Carolina and around the country, the campaign is succeeding at its main goal of speaking directly to the needs of the masses. It does not offer them empty platitudes in an attempt to garner votes, but provides concrete analysis and speaks the sobering truth that a united struggle is the only path to socialism and liberation.

The comrades in the Columbia branch of the PSL, along with comrade La Riva, demonstrated in a few short hours that socialism is not only needed in the South, but that the people want an alternative to the two capitalist parties and are receptive to the socialist program.