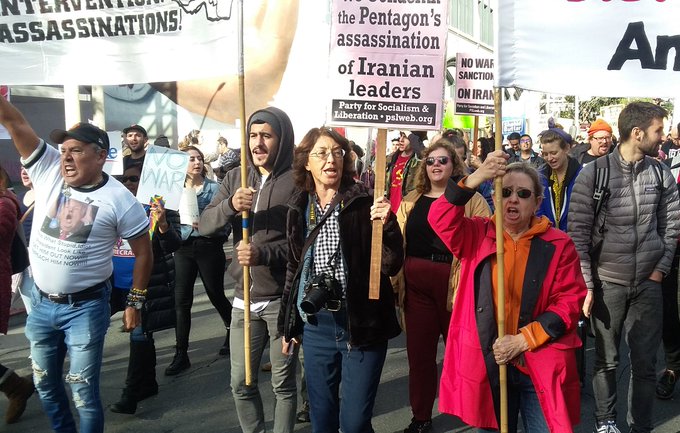 “Sanctions are a silent killer that have already had devastating effects in Iraq and Iran. I denounce Mike Pompeo’s and Steven Mnuchin’s announcement of more sanctions on Iran, which are solely intended to create suffering on the Iranian people," said Gloria La Riva, 2020 presidential candidate and longtime anti-war activist.

“It is clear that the Trump administration is not backing down from its belligerence. In fact, Trump is forcefully pursuing further confrontation, and is all the more reason for us to remain mobilized against a new war on Iran.”

“Sanctions are an act of war,” she continued, “I traveled three times to Iraq during the 1990’s when the United States government imposed a total blockade of the country for more than 12 years. I witnessed the human toll, thousands of people dying every month from the blocking of food, medicine, and infrastructure materials after the 78-day U.S. military bombing of 1991."

La Riva produced the 1998 award-winning documentary, Genocide by Sanctions: The Case of Iraq, based on her investigative work there.

“And now President Trump, via executive order, is virtually tightening a noose on Iran.” In the Friday address Treasury Secretary Mnuchin announced that Trump’s sanctions included penalties that would be applied to any individual or governments trading with or involved with Iranian construction, manufacturing, textiles or mining industries.

“Sanctions are designed to destabilize a country's society, they are part of a larger war drive,” La Riva said. “They hit the most vulnerable people first, the sick, young children, elderly and the poor because they lose access to necessary items. In Iran the prices of potatoes have already increased over 300% from previous sanctions. The costs of rice and chicken and many other goods have gone up. The point of sanctions is to create suffering—with these kinds of acts it is no wonder Iran and the Iraqi Parliament have called for the expulsion of the U.S. military from the region.

Secretary of State Mike Pompeo claimed that Iranian general Qassem Soleimani was behind imminent threats to Americans but when asked for specifics, he only cited the death of a U.S. contractor killed in Iraq. However, that was weeks prior to the killing of Soleimani.

La Riva said, "By logic and definition a past occurrence does not constitute not an imminent threat. What we know instead is that with Trump’s abrogation of the JCPOA, he embarked a while ago on an offensive that the people of the United States and worldwide are extremely worried about."

La Riva has been in the streets of San Francisco with thousands of other people demanding No New War on Iran.

She is running nationally for the Party for Socialism and Liberation, and in California she is seeking the Peace and Freedom Party nomination.

Point five of La Riva’s Presidential 10 Point Program reads, “Shut down all U.S. military bases around the world—bring all the troops, planes & ships home. U.S. foreign policy uses the pretext of national security to enforce the imperialist interests of the biggest banks and corporations. That is what is behind the endless wars and occupations. Use the $1 trillion military budget instead to provide for people’s needs here and worldwide. Abolish nuclear weapons. Stop U.S. aid to Israel. Self-determination for the Palestinian people, including the right of return. End the U.S. blockade of Cuba and sanctions against Venezuela, Iran and all countries. Independence for Puerto Rico and cancel its debt!”