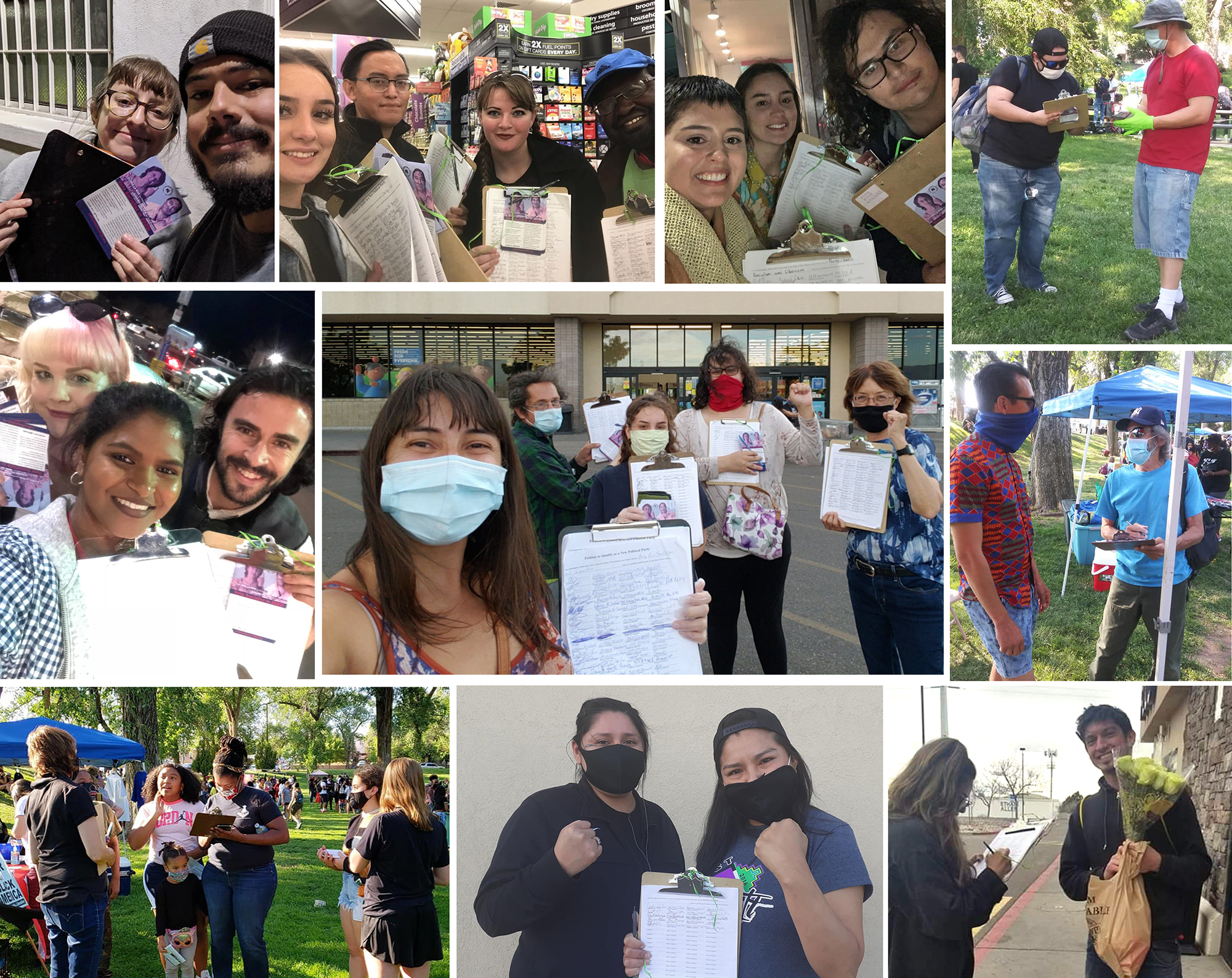 PSL members and supporters hit the streets to get the party on the New Mexico ballot, March and June, 2020.

In an exciting development for the Party for Socialism and Liberation, on July 2 the PSL was officially designated by the New Mexico Secretary of State as a qualified political party in the state of New Mexico. This despite the onerous requirement of signature gathering, made even tougher in time of the pandemic.

Now, when New Mexicans register to vote or update their registration, they can make their party affiliation the Party for Socialism and Liberation. Also, when they go to the polls in November, New Mexicans will be able to vote for a grassroots socialist presidential campaign!

Karina Aracely, New Mexico PSL organizer, stated, “Soon, the Statewide Convention of the PSL-NM will be held. There, delegates of the party will officially nominate our 2020 socialist candidates for the November 3 presidential election.

“We are excited about the opportunity to talk with people throughout New Mexico, of an alternative not only for the election, but the urgent need for the system we are fighting for, socialism, which puts the people first, not profits.”

In addition to New Mexico and several other states, La Riva will be the 2020 candidate for the Peace and Freedom Party of California, and the Liberty Union Party of Vermont.

The U.S. electoral system is rigged to give only the two ruling-class parties a competitive chance to win. Third-party candidates are subject to exclusionary and expanding obstacles in every state. For more than two years, the Democrat and Republican candidates have had non-stop media coverage, while the people only get realistic exposure to third-party candidates at their polling place, due to strict media censorship.

Still, the PSL nationally is running an energetic campaign to put forth our 10-point program, while also marching in the streets against racism and police brutality, holding car caravans to Cancel the Rents and more.

In New Mexico, candidates of the “major” Democratic and Republican political parties get to appear on the ballot automatically, no petition signatures required.

On the other hand, in order to qualify as a “minor” party, the PSL was required to collect 3,483 valid petition signatures from registered voters. In reality, the number needed is much higher.

Any signature where the voter’s name doesn’t match the address on file with the SOS is struck. That kind of error occurs when people move around a lot and lose track of the address they used to register. In states with widespread poverty like New Mexico, people are constantly on the move because even the smallest fluctuation in household income can turn into an eviction.

When this is accounted for, the real number of signatures needed to be safe is closer to twice the required amount: 6,966. The task is all the more daunting because low population density makes it hard to find large concentrations of people, and the places where people do assemble are often privately owned and petitioning forbidden.

The window to collect signatures was supposed to last from March 1 to June 25, just shy of four months.

Unfortunately, we had to completely shut down petitioning for more than three months, due to the necessary COVID-19 “stay-at-home” instruction, which our campaign strictly observed. Only after the state had announced a broader reopening mid-June did our campaign leap back into action, carrying out five more days of last-minute petitioning, from June 20 to 24.

Although the formal petitioning window lasts 117 days, in reality, the PSL only had 17 days total to ask the public to support our right to appear on the New Mexico ballot.

But in only 17 days of petitioning, our members and friends collected over 6,000 signatures! This not only speaks to the sheer determination and will power of PSL members and friends, but also to the widespread grassroots interest here in New Mexico for an alternative to the two capitalist parties.