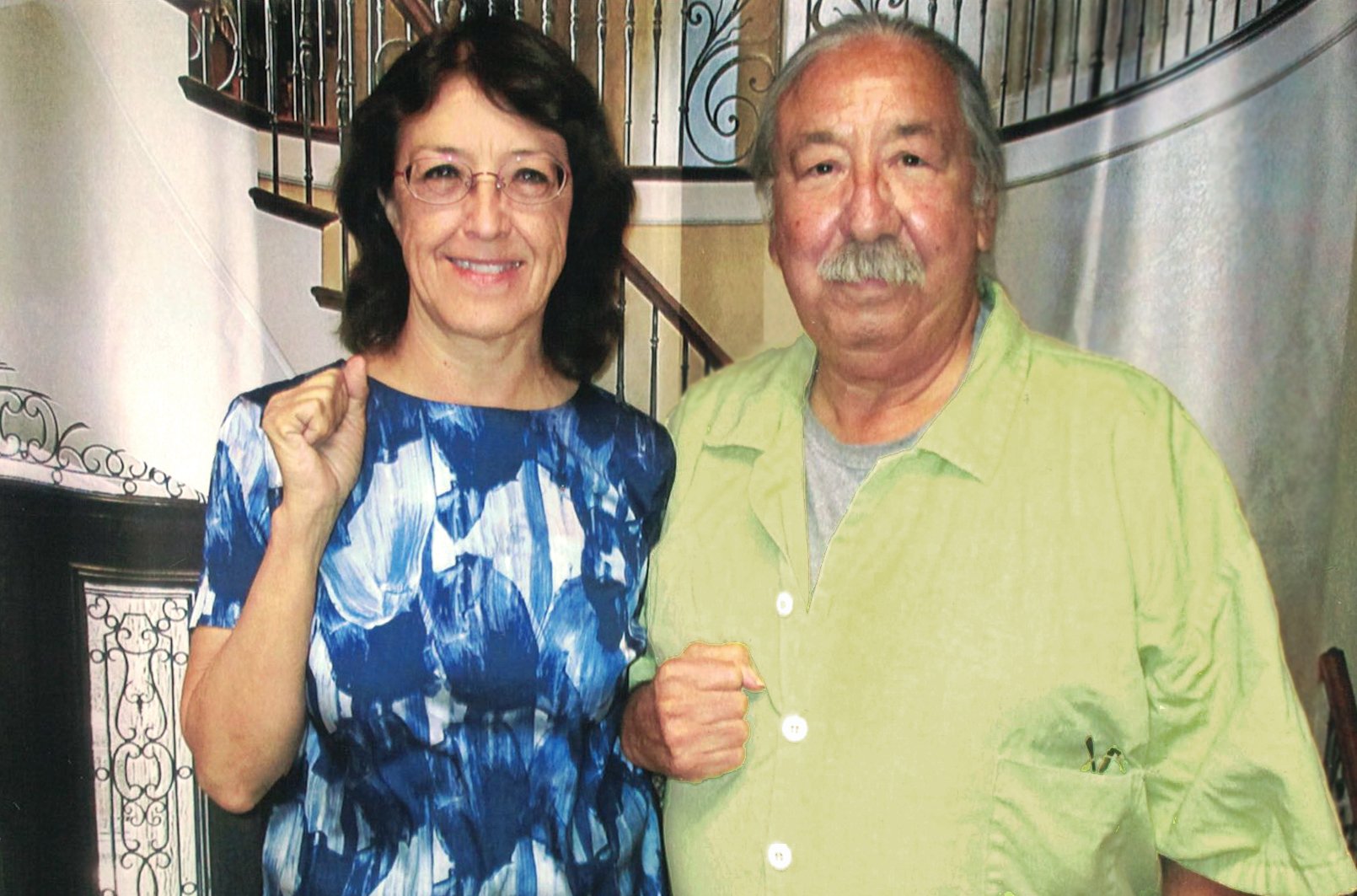 From February 1 to 3, I had the honor and privilege of visiting Native warrior and political prisoner Leonard Peltier, where he is unjustly imprisoned in Coleman I, a maximum security prison near Tampa FL.

In those three days of visit, we talked about so many things, from all the ongoing efforts in the campaign for his freedom, to international politics, to listening to his stories of childhood, and hearing about the conditions of life in the prison for him and his fellow prisoners.

On Saturday, I arrived 8:30 am at Coleman maximum security penitentiary, one hour northeast of Tampa, Florida. I joined many families and friends of 20 other men who received their personal visits in the visitors’ room. The visiting hours are 8:00 am to 3:00 pm, Saturday through Monday.

While waiting to be let into the visiting room, I spoke with some of the wives, mothers, fiancées, brothers and sisters of other inmates. I heard the stories of their heartbreak of family separation and other cruelties of prison and offered my solidarity.

After clearing security and following regulations that only allow the visitor to carry a clear plastic bag with money to buy food from the machines, we were led through one security gate, across a yard to another gate and the visitors’ room.

I was so excited to finally see Leonard after years of corresponding by mail! After a hug, and a hearty “Good morning!” to each other, we sat down. You are assigned where to sit by the guards, and visitors and inmates sit across from each other, separated by a table. First thing Leonard asked was, “How is Venezuela doing?” I had just flown in the night before from an international anti-imperialist conference in Caracas. I told him of my experience witnessing the determined resistance of the Venezuelan people defending the Bolivarian revolution from the past year of U.S. aggression. In early December, Leonard had conveyed a solidarity greeting to President Nicolás Maduro.

Leonard is extremely well informed, reading daily newspapers and following alternative, progressive media including radio. Our conversation focused on many current events. He receives and reads many books and shares his materials with the other prisoners.

One of the most memorable moments Leonard  shared were stories of his childhood, his youth and his lifelong striving to right wrongs, seeking justice for Native people and all people. He was greatly influenced as a child by his family’s and elders’ activism.

In one incident when he was only 6 years old with his family living in Montana, he and other little friends were playing outside when a group of white youth began throwing rocks at them, calling them vile, racist names. Leonard was shocked. “I had never seen white people before and I didn’t understand why they were yelling at us.” He threw a small rock back, which hit one of the boys. He was too afraid to say anything about the incident when he got home.

Soon the same day, the mother of the racist youth who was hit by the rock came to where Leonard and his family were living. She shouted angrily and threatened to call the police on Leonard and have him arrested. “I was numb and afraid. I didn’t want to say what happened, and finally my grandfather told me I needed to tell him.

“When I did, my grandfather knew we were in danger of me being kidnapped by authorities and sent away. That night we packed up, left Montana and returned to our home in Turtle Mountain.” That is the Turtle Mountain Nation Reservation, at the northern edge of North Dakota close to the Canadian border.

Leonard told me of his father’s and others’ fight against the federal government’s attempt to “terminate” the reservation and sovereign status of Native nations, in the 1950s. “Our Nation was the second to win that fight and defeat the termination. I was a young teenager and I attended the community meetings.” The first to defeat Washington’s termination plan was the Menominee Nation.

The second day of our visit, he marveled at recalling his little 4-year-old great granddaughter’s gymnastics when she visited him a few weeks ago, actually turning back flips! Leonard receives visits regularly, including his relatives, his lawyers, and the dedicated members of the International Leonard Peltier Defense Committee, headed by Paulette Dauteuil. She has worked for Leonard’s freedom for decades.

I shared the work that my comrades and many other supporters have carried out in recent months, from film showings of “Incident at Oglala,” the documentary produced and narrated by Robert Redford, to other activities at Pine Ridge Indian Reservation in the third week of January this year. People have organized letter writing parties, both to Leonard and to the warden during the prison’s recent six-month lockdown, calling for the elders’ unit restrictions to be lifted, while we followed the ILPDC’s guidance.

The visiting hours of all three days passed quickly.

Leonard was wrongly convicted for an incident and surrounding events that the U.S. government and FBI are solely responsible for, and of which he is innocent. That incident was the June 26, 1975 raid by two FBI agents, in plainclothes and unidentified, onto a small ranch in Pine Ridge Indian Reservation, South Dakota, in the midst of violent repression by U.S.-backed death squads — who called themselves GOON squads — that operated for an extremely corrupt tribal chairman, Dick Wilson. From 1973 to 1975, 64 members, men, women and children of the Lakota reservation, were murdered in those targeted killings, largely because they were opposed to Wilson’s rule.

When the FBI and BIA refused to protect the residents, members of American Indian Movement, among them Leonard Peltier, were asked by the people to protect the residents from the violence. When the FBI agents raced onto the farm, a shootout ensued between them and the AIM defenders. Both FBI agents Jack Coler and Ronald Williams and one Native man, Joe Stuntz, were killed.

Although two of the three Native defendants charged in the agents’ deaths, Bob Robideau and Dino Butler, were completely exonerated in trial, Leonard, who had escaped to Canada, was later tried after an outrageous extradition campaign by the FBI that was accomplished by terrorizing a Native woman, Myrtle Poor Bear, into falsifying testimony against Leonard. She had never met Leonard before her false affidavit, which she signed under threat of death by the FBI.

Because Leonard’s co-defendants were found innocent by reason of self-defense, the FBI decided Leonard would have to pay, even though he had nothing to do with their deaths. There was never an investigation into the death of Joe Stuntz, who was killed by a sharpshooter. The trial was moved to North Dakota with a presiding judge who refused Leonard’s right to present the same case of self-defense as his co-defendants. Witnesses were coerced, evidence was corrupted.

Large numbers of well-known national and international supporters have called for Leonard’s freedom, from 54 U.S. congressmembers to Nelson Mandela to the National Congress of American Indians.

In addition to helping organize actions for Leonard over the years, together with my comrades and so many of his supporters, I have anguished over the government’s outrageous persecution of him.

The PSL together with many AIM members, prisoners’ rights organizations and prominent individuals, have been involved in rallies, protests, petitions and campaigns on his behalf. A national 1985 tour demanded Freedom for Nelson Mandela and Leonard Peltier. Imagine that! It was a time when Nelson Mandela was virtually unknown in the general U.S. public because of the U.S. government’s complicity with apartheid South Africa, even though he was an international hero for leading the Black freedom struggle against the South African regime.

Nelson Mandela’s legacy is known worldwide today, but the fact most U.S. people were not aware of him in 1985 shows how fully the U.S. government, in supporting the South African regime, suppressed him and the anti-apartheid struggle.

And the same is true of Leonard Peltier. The U.S. government, FBI and federal courts, in vengefully denying Leonard parole or a fair hearing on suppressed evidence that proves his innocence, are also hiding the truth of his case.

If the people of the United States could know the true extent of the U.S. genocide against Native peoples, the wholesale theft of their land, the countless massacres by the army as well as racist settlers, if they could know that the 1970s repression on Pine Ridge Indian Reservation was part of that long war, if they could know of Leonard’s and AIM activists’ protection of the people at Pine Ridge, they would demand Leonard’s immediate freedom.

Meanwhile by 1985,  as we struggled to let the U.S. public know of Leonard and Mandela, millions of citizens of the Soviet Union had written letters to the White House calling for Leonard’s freedom. As a socialist country, the Soviet leadership had championed his cause and called him what he is, a political prisoner and a victim of U.S. government persecution.

When I wrote Leonard on behalf of our socialist presidential campaign to ask if he would accept being the PSL’s and Peace and Freedom Party’s Vice Presidential candidate (if we were to win that nomination), he replied that he would be honored to, as a “traditionalist and a socialist.”

We are organizing this new phase of struggle. We will fight for his freedom and for Native sovereignty, as well as to expose the capitalist system for its racism, poverty and endless war, and ultimately, the fight for socialism.

Despite the unfathomably long time of being imprisoned, Leonard remains a strong, positive individual with a profound sense of principles and justice. He has provided leadership for other inmates and had led in the restoration and defense of religious rights for Native prisoners over the years.

But make no mistake, as he told me, “I don’t want to die in prison. I want to go home now, to my family and people in North Dakota. I want to dedicate the time I have left to help the youth find their way.”

With years of correspondence, sending him birthday greetings, updating him on various struggles like the actions on his behalf, and of Standing Rock, I had not ever been able to visit Leonard in prison. I was truly heartened and inspired to share time with him, and of course I will visit him again until he is free.

It is never easy to visit a prisoner and at the end of the day walk away free while he or she remains locked up. As we walked through our respective doors after the visit, we each raised a fist in salute.

As long as we struggle, we can and will win. We must intensify the struggle to free Leonard Peltier, Mumia Abu-Jamal and all political prisoners, and to end this cruel system of mass incarceration!