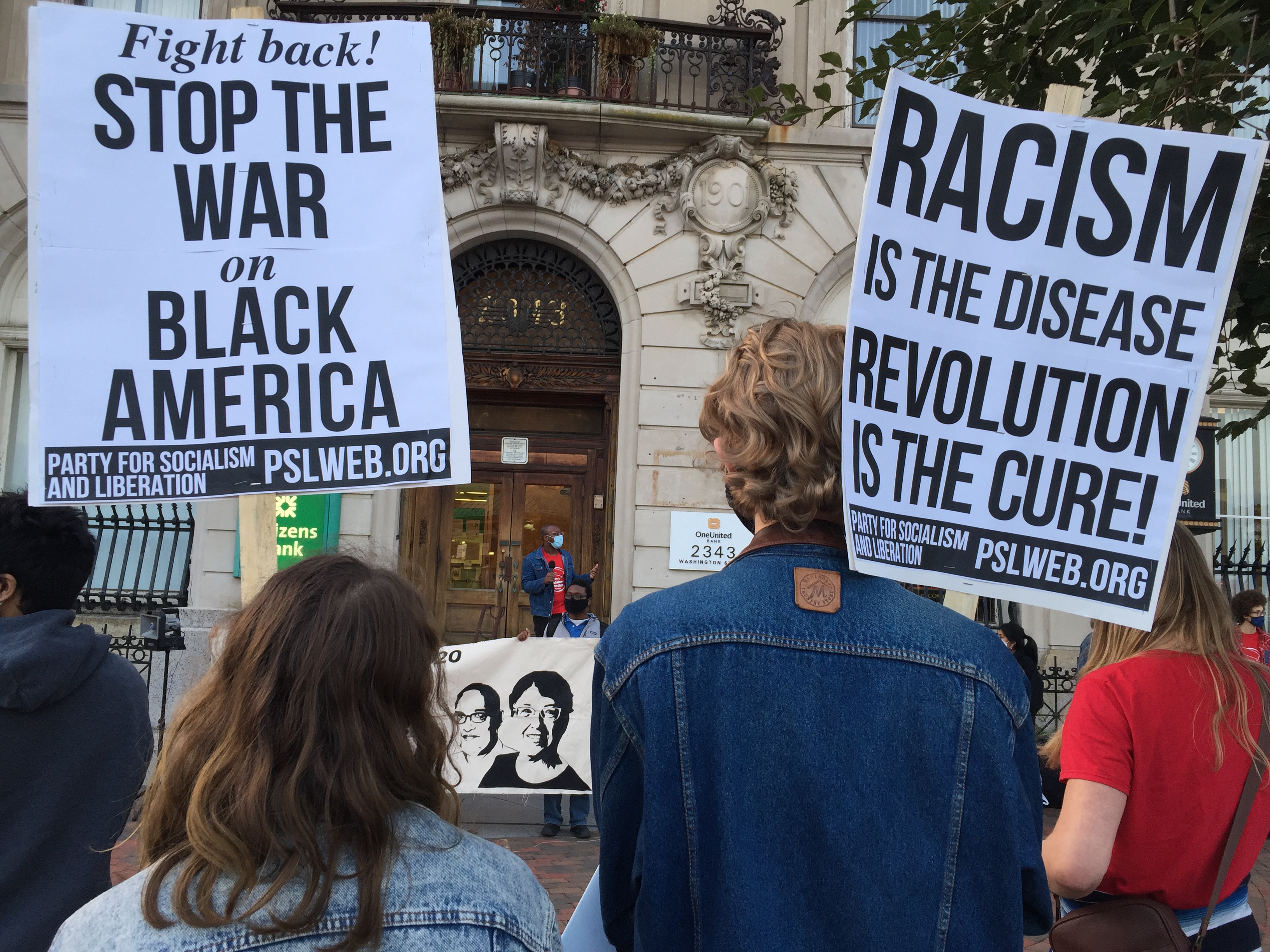 “Racism is the Disease. Revolution Is the Cure!” and “Jail Killer Cops! Re-Open the Cases!” read signs of the hundred-or-so attendees of a rally for socialist presidential candidate Gloria La Riva on September 18 in Roxbury, Massachusetts. La Riva recently achieved ballot status in 14 states and Washington D.C. and is currently doing a nationwide speaking tour. This particular rally was organized by the Party for Socialism and Liberation’s Boston branch.

The rally overlooked Nubian Station, Boston’s busiest bus station and a hub for working class Black and brown people. Nubian Square and the surrounding Roxbury neighborhood are facing extreme gentrification as developers exploit the community’s incapability to contend with rising rents. It is where the twin crises of the COVID-19 pandemic and unemployment have hit particularly hard. It is one of the more heavily policed neighborhoods in Boston.

“Winter is coming. It’s getting cold now.” La Riva began her speech by addressing those worries directly. “People shiver outside, and they will die and freeze to death because this city will not open up public buildings. There’s hundreds and hundreds of empty buildings now [that are] shut down because of the pandemic. Give people a place to live. Cancel the rents for all the people. And that includes mortgages as well, even for small landlords.”

“We're fighting for everyone, for everyone who struggles to pay the rent, who doesn't know if they're going to have a job tomorrow. [For everyone] who faces discrimination for being Black, Latino, indigenous, or any other person of color. Or just being a white working class person who also can't make it, who’s part of this exploitation of our country. We're all exploited if you're not a capitalist.”

During the rally, protesters became witnesses to the brutality faced by many Roxbury residents as a Black teenager ran past the rally followed by six police officers. As he rounded a corner, he was tackled to the ground and handcuffed before being punched in the mouth several times by a white officer. Gloria and other rally attendees caught up to the assault and began filming, but the officers kept insisting that everyone back away before the arrest was finished. Gloria refused to leave, telling the officer "we have a right to be here." Later that night, members investigated further to learn that the teenager was a 16-year-old Roxbury resident and that this incident was part of a string of similar arrests.

“To take on this monstrous, racist, vicious system of capitalism, the most vicious capitalist country in the world… is going to take organization, discipline, and a determined fight until we win, which we will.”

This last point seemed to particularly resonate with many attendees. “I want to get more involved with actually doing politics, not just reading about it,” local resident Jack Pierce told Liberation News. “The president has massive overarching powers over foreign policy. They could shut down military bases and pull out troops.”

“We demand that the U.S. lift the blockade of Cuba!” La Riva shouted. “End the sanctions on Venezuela!” Her anti-war track record drew massive applause. Julien Osborne, a student at Emerson College emphasized to Liberation News how there are “a lot of issues with the United States today. There always have been, including oppression of indigenous people and minorities, imperialism all over the world. [The US] crushes democratically elected and revolutionary leaders, and simply doesn’t treat people with human decency, domestically or abroad.”

La Riva supporter and PSL member Lile Kaumeheiwa summarized her rationale for voting socialist well: "The great thing about having a socialist candidate is that they are not caught up with meaningless reforms, or with fake lip service and things that are meant just to pacify the community rather than really changing it. Voting for a socialist means they are not bound by corporate entities, Gloria is truly going to bring us exactly what she says.”

What kind of future is the PSL campaign trying to bring? La Riva’s words:“Imagine a world where childcare is free; where a home is yours because the workers built it; where mass transit is free; where the earth can start to heal because we will stop all that insane production for profit; where everyone's rights will be respected. All culture, all languages, all people. The Palestinians will have their homeland, where true solidarity will flourish. And that will require organization, determination, and a party like the Party for Socialism and Liberation. We got more votes in 2016 than any socialists in 40 years. One, that’s a testament to our party organization, and two, the growing interest in socialism. What counts is the struggle after.”