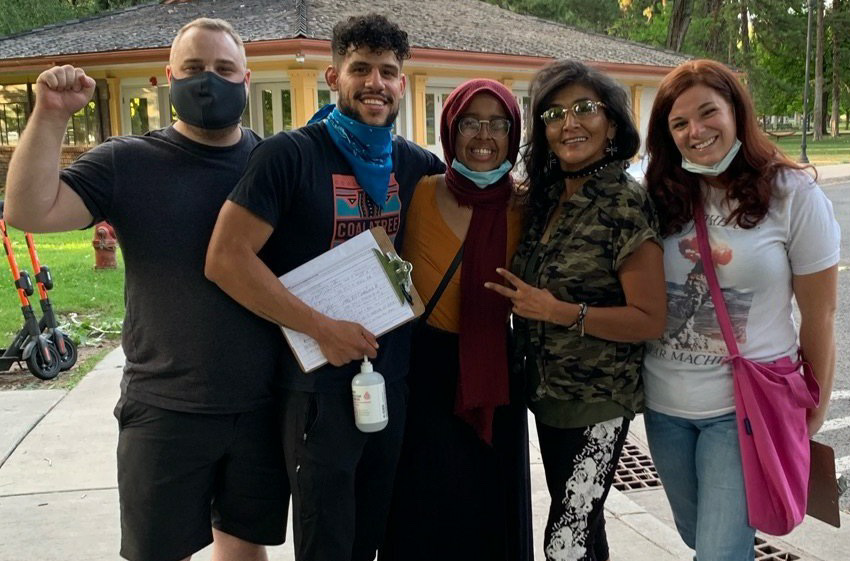 This November, Utah voters can vote for a revolutionary socialist. On Aug. 17, the office of the Utah Lieutenant Governor announced that Gloria La Riva had filed for access to the ballot for president of the United States, and on Aug. 24, validated the filing.

For third-party candidates, gaining ballot access is always challenging. While the Republican and Democrat parties receive an automatic spot on the ballot, the state of Utah requires third-party candidates to collect 1,000 signatures of registered voters to earn ballot access. This process became a unique challenge since the COVID-19 health crisis has prevented most major social gatherings.

Undeterred by these challenges, members of the Salt Lake branch of the Party for Socialism and Liberation petitioned at busy street corners, parks and farmers’ markets to collect signatures. Equipped with masks, hand sanitizer, and alcohol wipes, the petitioners worked hard to make residents feel safe as they engaged with them.

Members from the Denver and San Diego chapters supported the Utah campaign by traveling into Salt Lake City and spending their days canvassing. These big pushes for signatures made a consistent campaign possible. Meeting the goal for signatures required weeks of consistent work, but several positive moments kept the revolutionary optimism high through the end of the campaign.

At the farmer’s market one morning, another group with clipboards was walking around. One of them approached a PSL member and said, “we get paid per signature, how much are you all getting paid?” The PSL member smiled before explaining that we do this work voluntarily because we’re all Marxists and we support Gloria La Riva’s political program. Wide-eyed, this petitioner replied, “Alright, give me a pamphlet.”

On another day, a comrade approached a young person playing basketball in the park. This person took one look at the clipboard in the petitioner’s hands and yelled, “I won’t vote for anyone that isn’t a communist!” With a smile on their face, the petitioner handed him Gloria La Riva’s pamphlet and said, “Surprise.”

The small moments of celebration didn’t lack a grand finale. The last Saturday night of the campaign, petitioners were lucky enough to meet members of Leonard Peltier’s family at the park. Vonda Eagle Horses, a relative of Peltier, greeted them with hugs, cheering, “Free Leonard Peltier!” She told stories about her experiences in the struggle for indigenous liberation. Then she introduced the group of petitioners to a former member of the American Indian Movement who had taken part in the Occupation of Alcatraz. It was a moving experience that happened right when we needed it most — the last few days of the campaign.

After more than four weeks of daily canvassing, members collected 1,900 signatures, which the Salt Lake County Clerk validated, and the Utah Lieutenant Governor’s Office filed. This made Utah the 13th state to admit Gloria La Riva onto the 2020 presidential ballot.

The two ruling-class political parties of the United States dominate every major media outlet, which means that revolutionaries must take their political ideas to every popular platform possible to reach the working class. “As communists, our job is to meet the people where they are.” said West Valley City Organizer Amanda Peterson. “The people are voting in the political system we have now, so we should make sure our ideas are present on their ballots, even if we those ideas are opposed to that very system.”

Gloria La Riva will be the only candidate at the polls presenting socialist solutions such as: ending poverty, protecting families from eviction, ending racism and police violence, and combating COVID-19 in the U.S. The success of this ballot access campaign demonstrates the power and potential of people’s movements, as well as the interest from the community in political ideas that focus on their interests and not those of Wall Street.