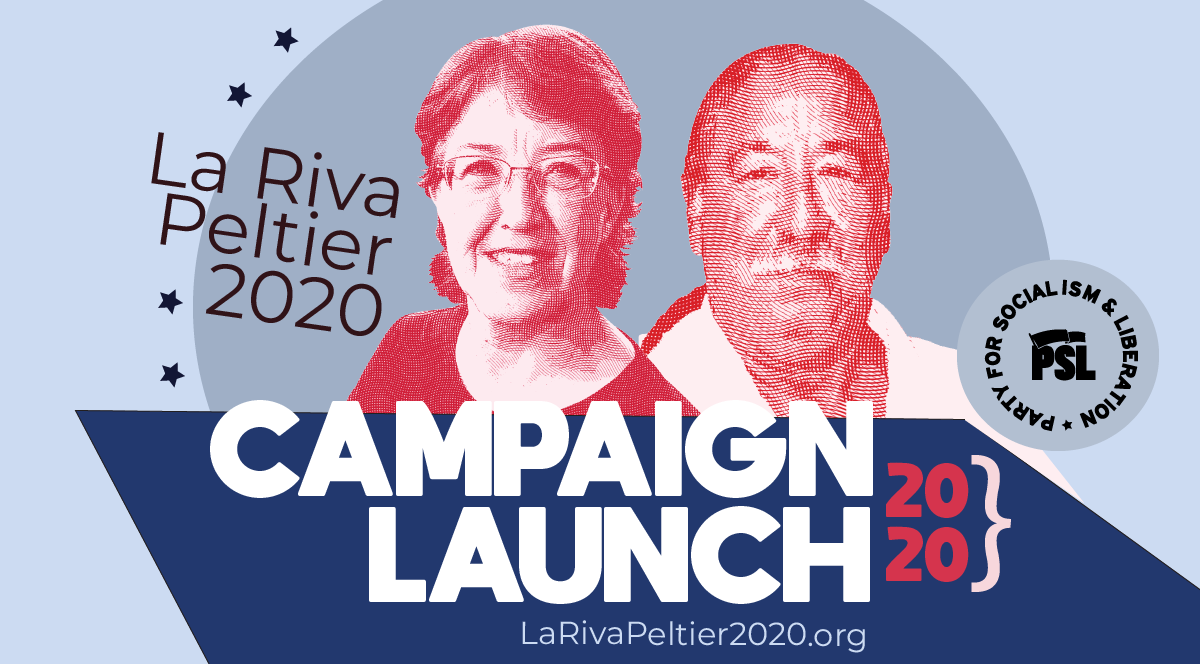 “The world is facing unprecedented crises, none of which can be solved within the existing capitalist system. We are in a race against time. The need for the radical reorganization of society on a socialist basis has never been greater or more urgent,” said Gloria La Riva in announcing her 2020 presidential candidacy as the nominee of the Party for Socialism and Liberation.

La Riva’s vice-presidential running mate is the renowned Native leader and political prisoner Leonard Peltier, who has been unjustly incarcerated for more than 43 years. He was railroaded into prison by the FBI and federal prosecutors in 1976, despite his innocence. A worldwide movement demands his freedom.

In a letter from the Federal Corrections Unit in Coleman Florida accepting the nomination, Leonard Peltier wrote: “I am not only a Native traditionalist, but also a socialist, who is against any abuse and exploitation of the working and poor class!

“Plus, as you are well aware, we Natives are the true environmentalists.  These are just reminders. Nothing has changed for me! So, I’m more than honored to accept your offer to run on your VP ticket.”

In announcing their campaign, La Riva and Peltier say: “The greatest threats confronting the working class and humanity worldwide include the growing danger of new and wider wars, catastrophic climate change, and the corporate destruction of stable employment — which will have even more devastating consequences in the looming economic crisis.”

Over 140 million people are now dealing with unstable work, unaffordable housing, no savings, no health care, no retirement — and no sign that the future will be any different.

“As the system plunges deeper into these crises, all in search of the almighty dollar, the question for the ruling class becomes how to maintain social control. Demagogues like Donald Trump scapegoat immigrants and launch new crusades against the women’s and LGBTQ movements. Both parties drain city and state budgets by investing in militarized police and racist mass incarceration — the world’s largest prison system. Both parties expand the enormous Surveillance State that keeps watch on the entire population’s every move, every email, text, click and purchase — hand in hand with the telecommunications monopolies.

“The ruling class is curtailing the right to protest and dissent, while turning heroic actions like Standing Rock are turned into felonies. Meanwhile, fascistic and white supremacists movements are encouraged to grow. The Wall Street bankers who committed widespread fraud and foreclosed on millions of families’ homes and the pharmaceutical executives whose massive opioid drug dealing has left hundreds of thousands dead, walk free.

“People who want to change this state of affairs  cannot rely on the Democratic Party leadership, which has put up no real resistance to the very real imminent threats, choosing instead to focus on the lie that Russia is responsible for Trump and his victory. This narrative completely hijacked the massive grassroots resistance to Trump in the months after his election, and sapped the energy of so many people who wanted to fight his atrocious attacks on immigrants, refugees, women, workers and the environment.

“When the Democrats had control of both houses of Congress and the Presidency from 2009-11, they did nothing to provide for the legalization of millions of undocumented workers. Today, the Democratic leaders criticize the criminal treatment of refugees by the Republican administration, without mentioning their own culpability in militarizing the border and expanding the deportation machine. Today they present no ‘path to citizenship’ or amnesty for the undocumented, and instead use their suffering for political grandstanding.

“On the vital issues of foreign policy, almost the entire Democratic Party applauded Trump’s bombing of Syria. Very few call to reverse his outrageous recognition of Jerusalem as the Israeli capital. They attacked him for being too soft on North Korea and not carrying through his threat to bomb Iran. They support the militarization of the Asia Pacific, preparing for future conflicts against nuclear-armed China.”

“Our campaign supports all reforms which benefit working class and poor people. But reforms by themselves are not enough and important reforms that were hard won by the working class are being wiped out.

“Capitalism is a corrupt, bankrupt system that is destroying the environment and the lives of countless millions, while the super-rich accrue obscene wealth. Its driving force is not just profit, but the maximization of profit, so resolving the rapidly accelerating climate crisis under capitalism is not possible. The whole military-industrial complex and bipartisan foreign policy establishment is willing to wage never-ending and larger wars just to preserve U.S. imperial power that is rapidly in decline.

“Socialism is a system where the wealth of society, created by the labor of working people, is used to create a sustainable environment while providing every person with a decent job or an income for those who can’t work, free education and affordable housing.”

“Socialism does not mean greater taxes on the tiny class of corporate owners who control so much wealth and decision-making over the rest of society. It means removing them from power entirely, and creating new, truly democratic institutions in our neighborhoods and workplaces, at the city, state and national level.

“A socialist system would make the highest priority eliminating institutionalized racism, bigotry and inequalities. Police brutality and mass incarceration would be ended. Native treaties must be honored. Immediate right to citizenship must be granted to all people living in the United States.

“Socialism means making health care truly affordable by making it free for all people. The military-industrial complex and the Pentagon war machine, with its almost 1,000 bases around the world, are not for ‘defense’ but for Wall Street’s global empire. It should be dismantled. The blockades against Cuba, Venezuela and the sanctions against all the other countries, an expanding form of economic warfare, should be lifted..

“Access to contraception and abortion must be guaranteed to all women. Equality in every area of life must be realized for women and LGBTQ people.

“We are confident that our message of the La Riva/Peltier Presidential campaign will gain many supporters across the United States.”

Leonard Peltier was the 2004 Presidential candidate of the California Peace and Freedom Party (PFP) and Gloria La Riva was the PFP’s 2016 candidate. They will be seeking the PFP Presidential nomination in 2020, as well as ballot access for the Party for Socialism and Liberation in many states.